What is TV White Space and Where is it Useful?

If you want to communicate without wires, you need to use a specific frequency. A frequency is like a note on a piano – I can play a high note, and you can play a low note, and both can be heard at the same time. But if I play a high note, and you also play the same high note, our notes interfere and blend together. In wireless communication, the sender and the receiver agree on the frequency to use, and provided no one else is using that frequency nearby, communication can take place. We all use wireless communication every day, in our cell phones, our laptops, our remote controls, our wireless headphones, our gaming platforms.

In the United States, the Federal Communication Commission (FCC) manages the assignment of frequencies so that different uses and users don’t collide with each other. Way back in the early days of television, frequencies were assigned to television stations so they could broadcast their content over the air. Television sets had “rabbit ears”, a pair of receiving antennas coming out of the top of the television to receive each station. Today most television is sent over cable or fiber, both supporting many more channels because they are not restricted by the frequencies available to transmit over the air. As a result, in many areas, especially rural areas, some of the frequencies originally reserved for television stations are not being used. These available frequencies (also called “white spaces”) can be used to extend the range of Internet Service Providers (ISPs) using the right kind of equipment.

There are two forms of TV white space (TVWS) usage: fixed and mobile. A fixed TVWS installation uses a base station placed in a fixed location and connected to the Internet such as a library or a school, and transmits to a collection of receiver units also in fixed locations such as a home, a business, or a park. Internet-capable devices connect to the receiver units using WiFi for access to the Internet. Two factors determine how far the receiver units can be placed from the base station: the height of the base station antenna and the amount of power allowed in transmitting. Higher height and higher power result in longer transmission distances, allowing receiver units to be placed further from the base station. The FCC has rules about maximum antenna height and maximum power, both meant to reduce the region of transmission to avoid interference. The height maximum also affects how the antenna looks visually, with lower heights meaning the antenna is potentially less disruptive to the local landscape. In March 2020 the FCC issued a Notice of Proposed Rulemaking to increase the allowed antenna height from 250 meters to 500 meters above the average terrain, and to increase the allowed power from 10 watts to 16 watts in less congested areas. “Height above average terrain” (HAAT) means what it sounds like, and prevents an antenna from being placed, for example, at an unusually high location in a geographic area. “Less congested” refers to how many of the TV frequencies are already in use in the area. Generally rural areas are less congested, while urban areas are congested and therefore subject to different rules about power.

Mobile TVWS usage refers to mobile devices directly using TVWS frequencies to communicate, without use of a fixed receiver unit. To be sure that mobile devices do not interfere, they must operate only in “geo-fenced” regions that define the geography where frequency is available. If the device leaves the virtually fenced area, it must stop using the TVWS spectrum. Mobile devices learn about these regions using GPS to determine location and a database that describes where frequency is available.

To install TVWS equipment in a specific region requires first figuring out what frequencies are available by consulting an official database that keeps track of which frequencies are already assigned to television stations and other approved uses in a given geographic location. Information about available frequencies is then combined with information about possible base station locations to pick a place to install the base station and to decide the frequency that the antenna will use. Receiver units must be placed within the transmission range of the antenna, with the additional caveat that objects such as trees, buildings, and terrain between the antenna and base station can interfere with transmission. These caveats mean that it takes some on-the-ground experimentation to find a good placement of the base station and the receiver units.

There are a number of companies selling TVWS equipment, including Carlson Wireless, Adaptrum, and 6Harmonics. Microsoft has been a big proponent of TVWS deployment, through their Airband initiative.

Despite the need to identify channels and to experiment with placement of equipment, we are positive about the potential for TVWS technology to help address connectivity issues in rural areas. The technology can reach relatively long distances, provide good bandwidth, penetrate objects, and provide familiar WiFi client functionality. It isn’t turn key, however, so there are implications for ISP staff to be closely involved with tinkering and collaborating with vendors in making deployment work.  In our own work we have partnered with tribal ISPs that serve Native American reservations, to deploy TVWS links that extend Internet connectivity to homes deep within the reservation.  While the technology is still evolving, we have seen positive results and are excited by the ability of this technology to expand the reach of the Internet into regions that are otherwise difficult to reach. 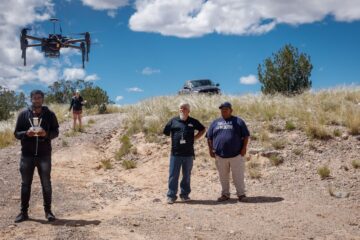 Notes from the Field: Wardriving and Warflying: Collecting Accurate Spectrum and Coverage Data in Indian Country 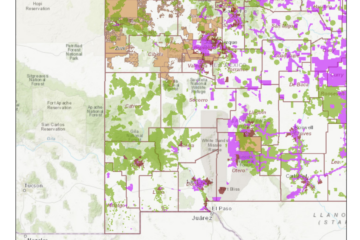 By Ivone Masara and Marisa Duarte As community-centered tech researchers, we are learning a lot about how geospatial data sets shape the innovation of rural place-based information and communication technologies (ICTs).  Especially with Internet-enabled systems, Read more…